Follow the footsteps of a missing journalist and unveil her dangerous secret!

Your team will make the difference: Anne's assistant Sascha needs your help to pick up the pieces and solve all those puzzles she left behind. What happened to her? What is the mysterious "Consortium" she tried to mess with?

Learn more about how these games work by scrolling down.

How to buy and play?

Choose your game from the list and put it into the shopping cart.
After your purchase you will receive an automatic mail. This mail contains your personal link to the game. Share the link with all your team so you can open it and play together.

Usually it takes just a few minutes until you receive the mail. Please be patient if it takes a few minutes longer, and maybe check your spam folder too. In the evening hours servers might be busy. Thank you for playing!

Three episodes with some serious puzzles - and cliffhangers!

Each of the three episodes of this trilogy tells a part of the story. Lots of very variable puzzles have to be solved by you and your teammates at yout home screen(s) in order to pick up the traces of Anne. Help her to finish her - and your - goal: stop the evil Consortium!

play world:
open: can include actions outside of the game screen.

To keep the local vibe of the game, we deliberately chose to record all the audio with german natives. We thought this would give a nice touch. But don't worry, we won't yell Achtung at you all the time.

In this series we're going to follow the footsteps of a mysterious journalist, called Anne. She is taking on a criminal consortium, trying to uncover and stop their dangerous crimes.

This organisation has not only committed lots of environmental crimes; it also seems that there is something much bigger ahead. Anne made up her very own risky plan to stop the consortium. But something went wrong...

Your team at the screen(s) will play the role of her rather unhurried assistant, called Sascha. He is a lover of puzzles and challenges - just like you, probably.

But he will soon have to prove that there's more to him than just pointing and clicking. That said... he needs your help!

We all love our stories sliced into three digestable parts, don't we? So we decided to make a trilogy too, in order to have more time and space for story and puzzles. 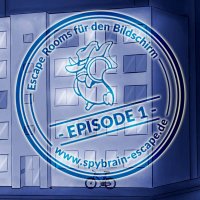 Can you pick up her trace?

This episode, just like the others, contains a great variety of puzzles and tasks. Some classical escape room puzzles, some we would rather call digital puzzles, and others... well, you'll see! 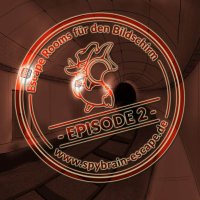 The second part takes us deeper into the story. While we are trying to follow Sascha in his puzzle-filled effort to find and rescue his boss Anne, we also learn that there might be a way to stop the consortium. Or is there?

Episode 3: The heart of the mountain 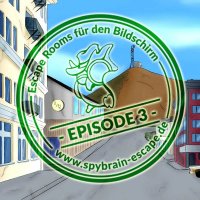 In the third part we are going to take a big trip to save lots of lives. Lots of new scenes and surprises make up a finale that no real escape room could offer!

Put on your hero gloves and hit the puzzle road to stop that dangerous consortium!

Again, this game contains a great variety of puzzles and tasks for you and your team. We put great effort in making the puzzles thematic and tie them into the story.

What do players say? Reviews and opinions

"Spybrain's games would be the first point-n-click type of game that we truly felt the immersion. It seamlessly combined storytelling and puzzles through beautifully illustrated artwork."

"We liked it so much that we instantly played all three parts of the story!!!"